The Grinch Who Stole Sex Toys
There are plenty of low down and dirty criminal activities that happen every day. But stealing toys has to be considered

Get Your Pride On With These Essentials

Let’s say you want to go camping. You’re going to have plan exactly what to bring to make the trip as fun and comfortable as possible. Most likely, we’re talking about a tent, a sleeping bag, food to cook on an open fire, a cooler, insect repellent. You’re not going to have a very good time if you don’t bring the essentials.

Well, if you’re heading out to your local Pride festivities, some advance planning will also do you a world of good to ensure your celebrations are as fun and comfortable as possible. And by celebrations we are talking about sex!

There’s no mincing words here: Pride is a great opportunity to explore all kinds of sexual desires and fantasies. The event is deeply steeped in sex and sexual expression, offering us all the chance to find people who share our sexual interests and desires and then fuck their brains out.

Is Pride Just About Sex?

This is a common misconception about Pride celebrations, most often perpetrated by mainstream media. Yes, sex is a big part of Pride, but it isn’t the only important part of the party. If that seems contradictory, let’s explore the idea.

Pride grew out of a political act and at its core, it will always be a political act until there is true equality and queer folks are no longer considered an “other.” To demonstrate their status as equals, LGBTQ people have incorporated sex into their event—in the same way sex is embued into so many straight community activities and events.

However, it is completely within everybody’s right to celebrate Pride however you want. With sex or without. But if you choose the sexy route, we’re here to help.

Get Your Sexy Pride Essentials

There are many different ways to enjoy a sexy Pride. Here are some essential items to bring along! As most Pride celebrations take place during warm weather, it is very important to ensure you remain hydrated while you have some good, queer fun. But that isn’t limited to water! Lube is the best sex friend you can have. Keeping a bottle of lube on hand will ensure you are always ready for whatever shenanigans come up. And considering everybody has different tastes in lube, it is not a bad idea to keep a bottle of water-based and a bottle of silicone lubes with you!

Whether you’re attending a smaller Pride or a big, extravagant Pride, you’re bound to meet lots of new people. And if any of those people catch your fancy and you catch theirs, you might find yourself in the company of a new lover. But what will they like? What will they be into? Since you can’t possibly pack all of your toys, a condensed but diverse Sex Toy Kit will help ensure you both have a great first time together. We hope you have a great Pride and we hope you have great times after Pride. Finding out that you have acquired a sexually transmitted infection after having some sexy shenanigans during Pride might. Fortunately, most are easily treatable and nobody should feel shame. However, if you would rather make an effort to avoid that situation altogether, keep some condoms at the ready (and remember they can be used as dental dams too).

How To Be A Great Kisser 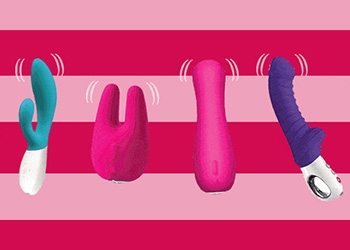 Vibrators Are For Everyone - Including Men! Pucker Up For Dick Lipstick

Why Are Millennials Abstaining From Sex?

Can Sex Ward Off Dementia?

What Is Normal Sex?

No comments yet for "Get Your Pride On With These Essentials" – Be the first!